More iTunes for your money 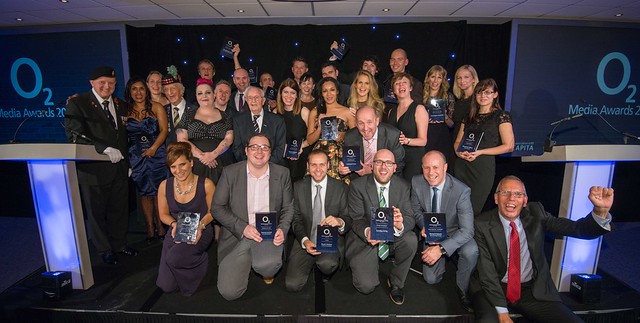 ITV Granada Reports took away the lion’s share of the prizes in this year’s O2 Media Awards North West.

Correspondent Matt O’Donoghue was named TV Journalist of the Year and overall News Reporter of the Year. Judges praised his exclusive investigation into abuse at a children’s care home and sympathetic reporting of Alan Henning’s brutal murder by ISIS.

Granada anchorwoman Lucy Meacock was crowned the region’s top Broadcast Presenter, while the team also picked up the Scoop of the Year trophy for their exclusive story on Derek Hatton’s bid to rejoin the Labour Party, 30 years after being expelled. Hatton, the former political firebrand turned millionaire businessman, presented the award at the cermony in Chester.

BBC North West Tonight’s Richard Askam was presented with the award for top Sports Broadcaster by racehorse owner and rugby league boss Marwan Koukash. BBC colleague Clare Fallon was the unluckiest nominee of the night. Despite a hat-trick of individual nominations she narrowly missed out on the top spot, despite being roundly praised by the judging panels.

In the print categories the Liverpool Echo maintained its grip on the Daily Newspaper title. Judges praised the way editor Ali Machray had listened to reader comments and changed the look and feel of the paper for a digital age. The Echo added a brace of other awards winning Best Website and Weekly Newspaper of the Year with the Sunday Echo. The Sentinel, Stoke put in a stong performance, winning awards for their Specialist Publications paying tribute to World War Two veterans. The paper also won the Feature Writer trophy through Jenny Amphlett.

Commercial radio stations dominated the radio categories. Juice FM presenter Chris Chambers was named Radio Journalist of the Year and the station was also named Broadcast Team of the Year. Michelle Livesey of Key 103 won the Community Journalism award for the station’s Street Angels campaign, launched after the death of 17-year-old Adam Pickup in Manchester. Adam’s parents Chris and Chantal presented the award.

More than 25 working editors and executives from newspapers, magazines, broadcasters and on-line publications were involved in the judging process.

With more than 360 individual entries the O2 Awards in the North West is the biggest regional press awards of the year. BBC Breakfast presenter Louise Minchin hosted the evening’s celebrations.

Nicola Green, Director of Communications and Reputation at O2 UK, said the judging panel was hugely impressed by journalists working across different media organisations in the North West.

“Congratulations to those who made the final line up, but also a huge thank you to everyone who entered this year’s competition. The evening was a celebration of some superb journalism and a reminder of how important the regional media is to local communities.”

Capita, a UK leader in business process management and outsourcing solutions, will also support the Awards. O2 extended its existing partnership with Capita to include the running of O2’s call centres across the UK.

Ben Tolhurst, Capita O2 Partnership Director, said the Awards were one of the most prestigious of their type in the UK.

“We are delighted to sponsor these awards. The event enables us to look back at how the press brought news events to life for readers, viewers and listeners across the region.”

Broadcast Presenter of the Year

The Sentinel, Stoke – Our Big Read

Daily Newspaper of the Year

Team of the Year (Broadcast)

Team of the Year (Print)

Feature Writer of the Year

News Reporter of the Year

Images of the Year

Radio Journalist of the Year

Scoop of the Year

Specialist Publication of the Year

The Sentinel – Echoes of WW2/Salute to the Few

Specialist Writer of the Year

Sports Reporter of the Year – Broadcast

Sports Reporter of the Year – Print

Television Journalist of the Year

Weekly Journalist of the Year

Weekly Newspaper of the Year

Young Reporter of the Year

All O2 news releases can be accessed at our website: www.o2.co.uk/news

Phishing & Smishing - What you need to know

CES 2020: My favourite tech from the show

Technology is amazing. It’s what connects us, allows us to call friends and family a…Read more

O2 switches on 5G with unlimited data, flexible plans and no premium

More iTunes for your money